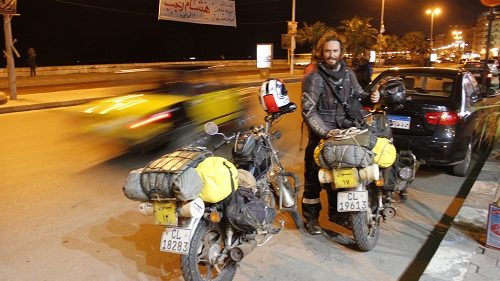 We got up before sunrise as we still had 520 km to go. 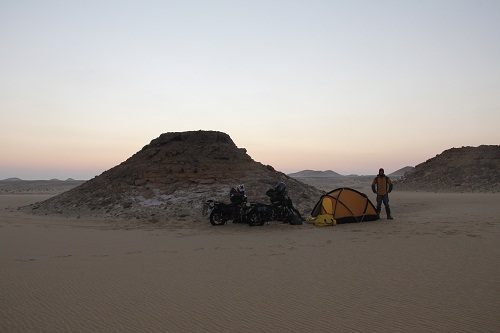 The plan was to ride hard to reach the pyramids at Giza before 12h00 and the tackle the Cairo-Alex highway to reach our end destination before sunset. I tried my best to keep my speed as close to 80 km/h as possible (we had more than 300 km to Giza), but there was a headwind and the tarmac soon ended reducing our speed to 50 km/h. I recalculated and at that speed we would just make Alex if we skipped the pyramids. Luckily after a while the tarmac resumed and there were no more police check points (aka tea stops). The best I could do in the wind was 70 km/h in fourth gear. I had the throttle pinned wide open and I started feeling the drivetrain slip every now and then. Then after only 240 km I ran out of fuel (normally we do at least 350 km). Luckily our fuel bags were full, so we’d be able to make it to Giza (another 120 km to go). 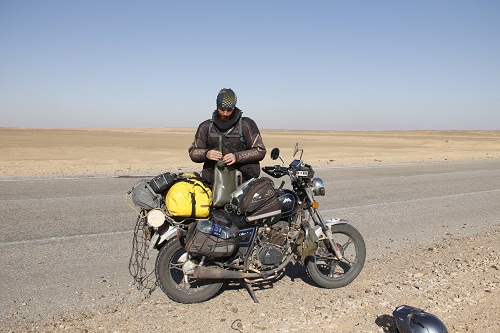 I adjusted the chain as it was sagging quite a lot, but when I pulled away the chain snagged and I had to stop. Loosening it again didn’t help either and I saw the rear sprockets teeth looked like shark teeth and some were so thin that they looked as if though they might break off. The last few days’ heavy riding and riding through deep sand to get off the road to camp did a lot of damage. Since I’m no mechanic I decided to replace the chain with a new one I bought in Sudan, but obviously the chain links wouldn’t fit in the severely worn sprocket. I took off the new one and put back the old, worn chain, but it kept jumping off the sprocket at anything above 40 km/h. By this time we’ve wasted so much time that we would only reach Alex at 22h00. To stop the chain from coming off I tightened it as much as I could and managed to reach 70 km/h by pulling away slowly. We made good progress and filled up just before Giza at 14h00. We decided not to go to the pyramids and headed straight Alexandria. Luckily the road had four lanes for the most part and we could do 80km/h at times. By this time we’ve only eaten a can of tuna and two oranges (that a truck driver gave us while fixing my chain). We quickly stopped at a stall next to the highway, bought four sponge cakes, and carried on. I realised the sun sets at 16h56 in these parts and by the time it was 17h00 we had 25 km to go. Tania’s bike’s lights and hooter has stopped working and the traffic became more hectic as we headed for Down Town Alexandria. We did not yet have a place to sleep and haven’t heard from Johan yet, so we just wanted to get to a place to eat and wait until the Voetspore guys arrive. It was madness driving at night in peak traffic, without lights. Everyone honks and ignores the lanes, creating four lines of cars in two to three lanes. It took us close to an hour to reach the Corniche where we had supper at the Pizza Hut, looking for a hotel on the internet and in our guide book.

Sorry about the bad pics, but this is all we have of our arrival in Alex: 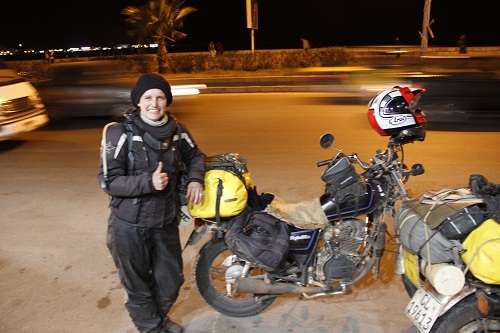 Driving around here at night is hair raising and we didn’t want to spend a minute longer on the road: 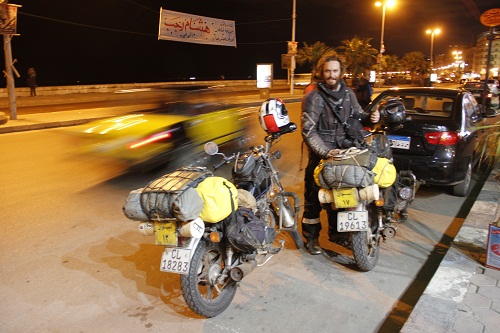 Supper and looking for a hotel: 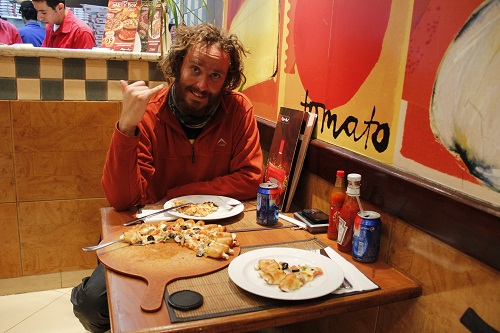 Johan sent a sms saying they’ll be there around 21h00 and told us where they’re staying. Simon and Kristy in their Land Rover (also part of our own Amazing race – and the ultimate winners because of a short cut) were already there. We checked into the Kaoud Sporting Hotel after the hardest and most stressful day of the whole trip.

In the end the two Motomias made the 15 200 km (more or less – more detailed stats later) in 90 days without ever being towed, pushed or loaded onto a truck and they’re still going. What’s more is that they’ve made it with the original set of tyres, chains and sprockets and we’ve put them through much more than what they are intended for. Well done, we very proud of the little bikes and don’t think it would have been easier on our 650’s. 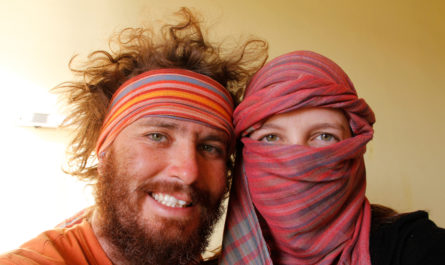 Doing the tourist-thing in Aswan 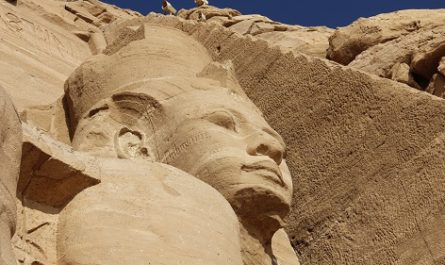 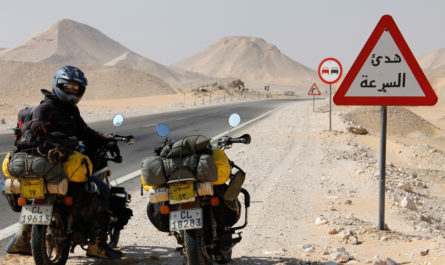 Staying with an Egyptian family in the Western desert

20 thoughts on “Alexandria at last, but what a day!”