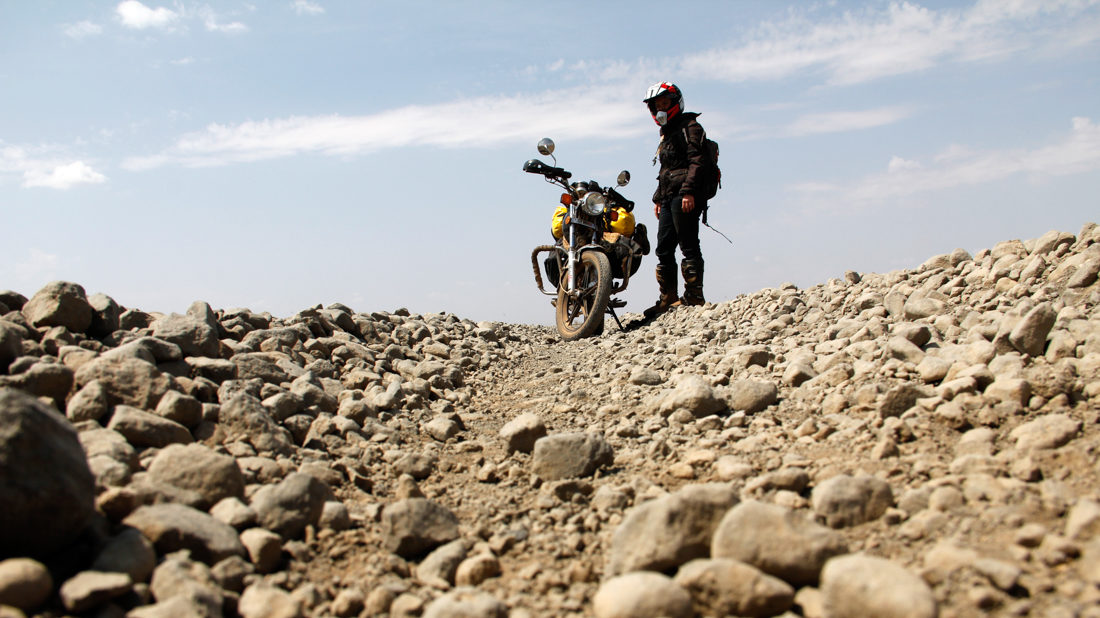 We did it! It was one hell of a ride today, but we made it to Moyale from Marsabit just as the sun was setting. The ride was very challenging and interesting as it took us through a series of ups and downs, frustrations and amazements. This stretch of 260 km gravel presented to us – rocks (many!), sandy patches, desolate desert scenes, even green valleys with trees, camels, donkeys, a jackal, bushbaby, mud and even some rain! The terrain is really harsh and we marvel at the fact that people can survive in this area. 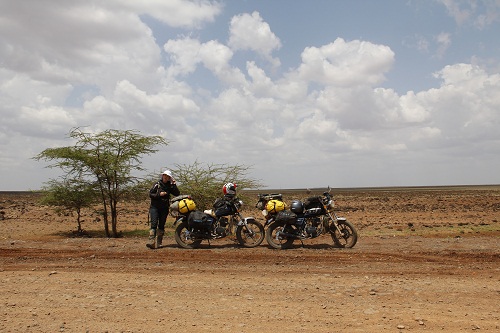 Our first down happened about 20km after we set off from Marsabit – the road was good BUT the rains washed in a large ditch in the side of the road and as Francois approached the road was very slippery with tiny rocks and the wheel slipped out under him. Luckily he was fine, with a few scars to show (as you will see in the last photo in this post :o))

Here is the skidmarks… 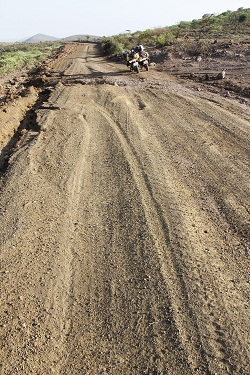 As the road gradually got worse and worse after 60km from Marsabit the next down was me! I slipped on some rocks and put down my bike. Here you can see the rocky road. 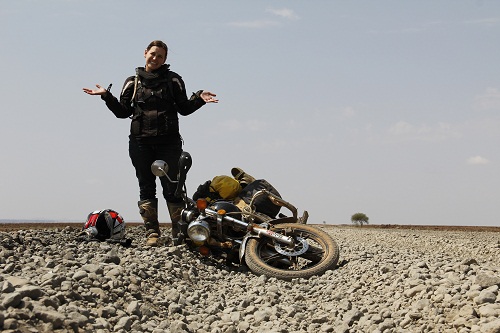 From here on the next 60km was tough terrain, really rocky and washed out from all the rain with almost no traffic. 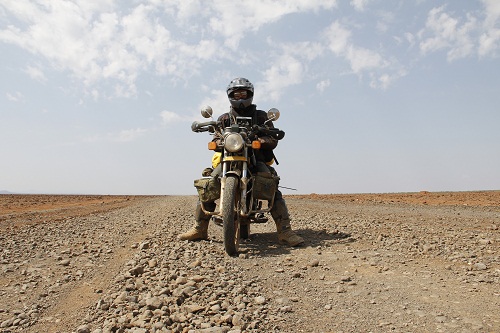 Sitting down for a rest 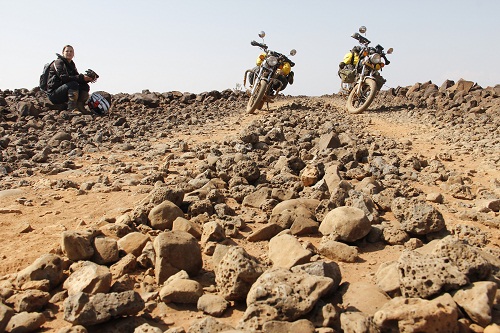 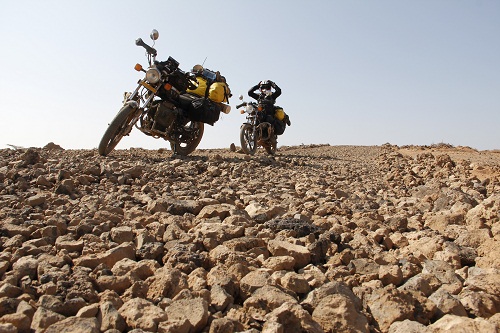 But pole pole we made it to Turbi (about hallway to Marsabit) by 13h00. The worst part was over and we pushed on to Marsabit. But then, just a few kilometres out of town I got a flat tyre :o( We set out to fix it and just as we started next thing we knew an old red Landrover Discovery pulled up and out jumped the three Wadies from England. Mark helped us to get the tyre fixed and inflated it with his compressor which makes the job twice as fast. A piece of glass had pierced the tyre and tube. We were so grateful for their help and even though they still had a long journey ahead to Marsabit they still helped us to get back on the road – thanks soooo much guys – if it was not for them we would not have made it to Moyale in the daylight… What a blessing and they were the only travellers we saw the whole day.

Here they are with Francois and we wish them all the best with their journey to Uganda! 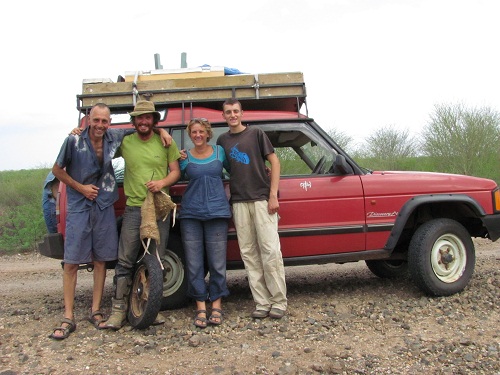 Soon after I got the flat tyre, it started raining a little and we then had to dodge some muddy sections. Again it took us down a few times (mine a few times more than Francois!), but luckily nothing serious! The terrain also changed here and after the rains that fell here in the last week or so it was incredibly green and puddles of water were still lying scattered next to the road. Here we had the opportunity to ride with three running camels in front of us :o) they have a very peculiar style of running which made me laugh out loud. We also saw some jackal, and a bushbaby along the way. We also saw a rainbow, so really we had something of everything today…

Unfortunately the border just closed as we got to Moyale and we had to look for some place to stay on this side (though all the places on the GPS are just 1km on the other side of the border). Now I don’t know if we were just tired, but some of the people here really got to us, getting a bit too close and loud and again asking for my shoes! The only place we could find at this hour was in the main road, the Sherif Hotel – now this place is really scruffy looking and depressing, but we have a roof over our heads and we decided that tonight there will be no showering or brushing teeth and I am trying hard not to look at the flies, but tomorrow is a new day and it will be time to move on and all this will not seem so bad anymore ;o)

Today was definitely the most challenging one on Crossing Africa so far, but also one of the most rewarding and one we will definitely not forget! Here is Francois showing his scars… eish! 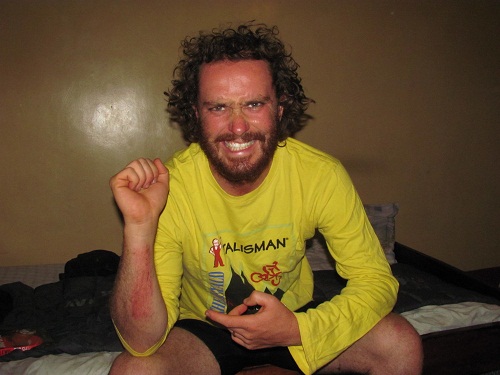 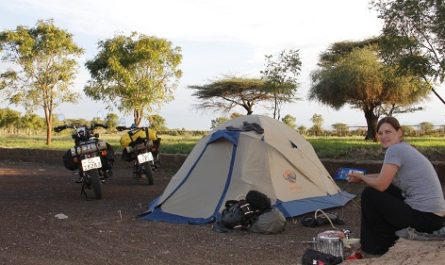 Africa is a small world 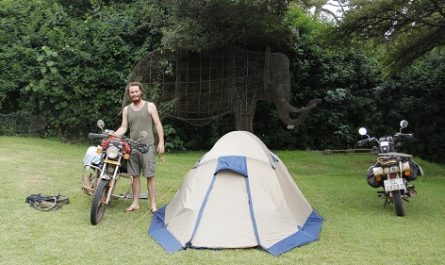 Stuck in Nairobi for the time being it seems 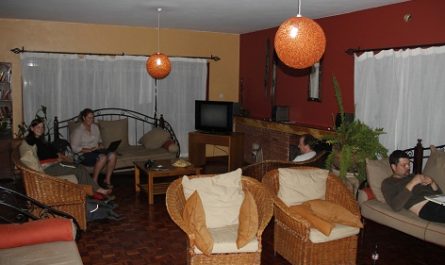 Waiting for the rain to stop in Kenya

12 thoughts on “Living up to its reputation: from Marsabit to Moyale”